Having been stuck in the Netherlands due to the eruption of Eyjafjallajökull I’ve finally managed to escape, if only to the UK. While this was nowhere near as impressive as my Escape from Belgium during a total public transport strike it was still a bit stressful. I’ve just had a chance to check the blog and found that Emma’s post from last year on Volcanoes from Space has become quite popular. Hence I had a bit of a dig around and found that the NASA Earth Observatory has a few amazing images of the ash cloud drifting out over Europe. If you are still stuck feel free to shake your fist at the screen while looking at these.

Here’s the rather dirty stream of ash drifting over the North Atlantic on April the 15th,

And here is the ash cloud sitting over Continental Europe a day later, 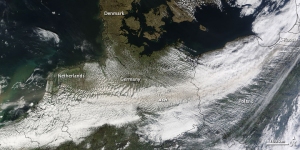 In the year AD 536 something catastrophic happened which caused a drop in the global temperature lasting several years and led to widespread famine, and possibly plague outbreaks too. This is right in the middle of the Dark Ages – a time about which by definition we know very little – so how can we be so sure about this? Well, it turns out that when human records are sparse, tree records step in to fill the gap. The series of concentric rings in the trunk of a tree provide a history of its growth and, seeing as a new ring is made every year, its age. If a summer is a lot colder than normal then a tree has to conserve its energy and so forms a narrower ring than it would have if the weather had been better. This is exactly what’s seen in the tree ring record for nearly ten years, beginning in AD 536.

The historical record of this period isn’t completely Dark, and the surviving accounts provide a clue as to what could have caused the prolonged cold snap. The interestingly named Michael the Syrian wrote that “…the Sun was dark and its darkness lasted for eighteen months; each day it shone for about four hours, and still this light was only a feeble shadow” while someone called Lydus in Constantinople observed that “…the Sun became dim…for nearly a whole year…so that the fruits were killed”. There are also numerous Chinese references to obscured skies and summer frosts.

All of this points towards something in the atmosphere – a ‘dust veil’ – which blocked sunlight and cooled the planet. But what could have put a load of dust into the atmosphere? Here, things get more intriguing. The obvious culprit is the ash and sulphuric acid produced by an enormous volcanic eruption – a phenomenon known as a ‘volcanic winter’. 1816, the ‘Year Without a Summer’, is a more recent example of this, caused by the eruption of Mount Tambora in Indonesia. However, volcanic debris is easy to spot as it leaves a very recognisable acid layer trapped in an ice sheet in somewhere like Greenland. Therefore all we have to do is extract an ice core, figure out which bit of it corresponds to the sixth century and look for the layer. Simple. Unfortunately for this theory though, by the late 90s no convincing volcanic signature had been found……

The alternative, astronomical, scenario for the AD 536 dust veil is an asteroid or comet impact. No impact crater has ever been linked to this time period which points towards a mid-air explosion called an airburst. These release large amounts of energy in the form of a tree-flattening shockwave (as happened in Tunguska in 1908) and can also potentially trigger forest fires, which could in turn inject large quantities of soot into the atmosphere. This is where I get involved. Several years ago I was part of a group that tried to calculate how big a comet-triggered-fire would have to be to cause the observed cooling. It turned out that the answer to this is an area the size of Northern Europe which seems rather unlikely! Surely there would have been some record if this had happened? Clearly fires could have added to the cooling but they couldn’t have been the sole contributor. Comet impact plumes may provide the solution. When the comet airbursts, some energy from the explosion, along with the debris, is funneled back along the impact path causing a plume of material, which then falls back onto the top of the atmosphere and causes the dust veil. Case closed, right? As with most things in astronomy, it’s not that simple.

The comet impact theory looked to be the most likely explanation until early last year when Larsen et al. published a paper presenting new and improved ice core measurements. These finally showed a clear volcanic related acid signal for AD 536, larger than the one found for the Tambora eruption mentioned earlier.

This should be the end of the story. Indeed, until several hours ago when I started putting this together and happened to come across this abstract, I thought it was. Their tantalising, but still unpublished, detection of impact debris in the AD 536 layer of another ice core points back to the cometary culprit again. Without reading the full paper nothing’s certain, which means that the Larsen et al detected volcano is the best option for now!

Volcanoes from space (not space volcanoes) 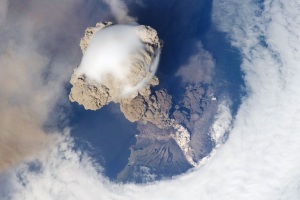 This amazing image of an erupting volcano was a lucky shot taken by the astronauts in the International Space Station, whose orbit just happened to pass over it at the right moment. Now I know that technically this blog is supposed to be about things outside the Earth, which should rule out this picture, but I’m making an exception as it comes from NASA! The volcano itself is called Sarychev Peak and it’s located in the Kuril Islands, northeast of Japan and the picture was taken with a normal digital camera, fitted with a 400 mm lens.

I didn’t realise until I investigated this photo further that the astronauts on the Space Station are trained, assisted and encouraged to take photos like this by NASA’s Image Science & Analysis Laboratory. All the resulting images are also available on the internet at The Gateway to Astronaut Photography of Earth. There are over 600,000 photos on the site, including images from the earliest space missions so they form an important scientific resource for people studying how the Earth has changed over the past decades. It can also provide the answers to some less serious questions…

If you’re interested in volcanoes, more information on the photo (reference: ISS020-E-9048) can be found here.