Have you been watching MasterChef, the BBC1 programme where amateur chefs compete to be crowned the, well, Master Chef? I have, and I think that there’s a serious flaw the competition. Don’t worry though. I think I know how to fix it.

Each week the contestants cook various meals either using their own recipes or in professional kitchens. They also have to invent a dish with surprise ingredients they don’t know about in advance. However, I don’t see how the judges can tell whether one contestant’s dish is better than another when everyone cooks different things? No, what’s needed is one menu per episode which can be prepared by all competitors. There could even be a master version – the food-standard to be met. Something like this:

Unfortunately this solution is also flawed. The trouble is that in the early stages of the contest a different set of aspiring amateur chefs compete each week. The winners of each heat then go on to semi-finals, quarter-finals and finals, until one person emerges triumphant. Ok, that may seem like a good way to do things, but the same problem remains: how can you compare contestants from different heats satisfactorily?

The Monte Carlo method uses random sampling to approximate the solution to a problem. It’s used a lot in astronomy to figure out the effect uncertain measurements can have on results. For example, say you want to count how many galaxies there are 150 galactic-miles (GM) away (‘galactic-miles’ are your own, personal, galaxy-distance measure). However you know that there’s an error on the distance you’ve measured, such that a galaxy you put at 145 GM may really lie much nearer or further away. You also know that 68% of the time your measurement will be within 10 GM of the true value, but 0.2% of the time you’ll be wrong by 30 GM.

To investigate the effect this uncertainty has you randomly vary the measurements thousands of times, bearing how likely each possible distance is in mind, and taking care that it obeys what you know about the error distribution. You then count the number of galaxies that happen to lie at 150 GM each time. Congratulations, you now have an estimate of how accurate your original count was. How good an estimate it is depends on how many times you repeated this step – the more the better.

Right, back to MasterChef. My new version’s pretty simple: the same set of contestants would cook the same menu each and every week. Each time random factors would change how well each person’s dish turned out. Some differences would be small (oven fractionally too hot), and some large. At the end, the judges would be able to asses not only who produced the best tasting food by direct comparison, but also how consistently they did it. The winner would be the person who produced the best meals on average, with the smallest variation between them: 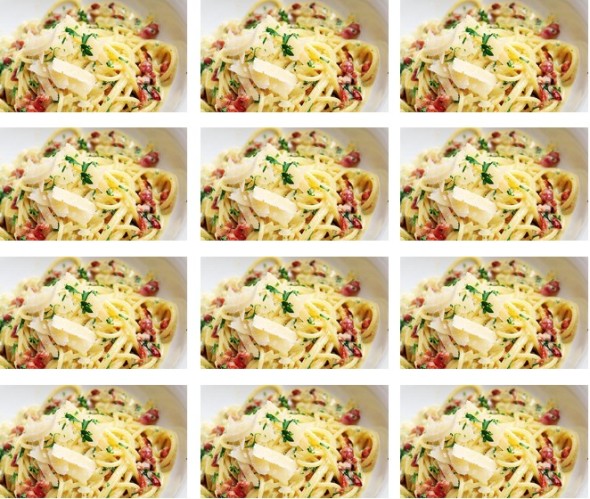 The only drawback that I can see with my suggestion is that it would probably turn MasterChef into one of the most boring programmes on TV!

I have a confession to make: when it comes to books I’m unable to resist a certain type of boys-own science fiction. Normally published in the first half of the last century, they imagine a futuristic world where space travel is normal and fantastic technology abounds. They were written at the beginning of the space race, when things were moving so fast that it seemed like people would be living in moon bases in a few years.

Last year, in a second-hand bookshop in Maine, I found an excellent example of the genre. ‘Stand by for Mars’ by Carey Rockwell is the first installment in the adventures of Tom Corbett, Space Cadet. It deals with his basic training at Space Academy (he’s a natural rocket pilot of course), and how he copes with the difficult job of leading his unit-mates: eager engineer Astro and supercilious navigator (and man with a chip on his shoulder) Roger Manning. He has space fever, eats spaceburgers, travels in space at space speed and plays a sport which I’m amazed isn’t named spaceball. He ends up, as you probably guessed from the title, on Mars, but can he save the day?

The book is definitely aimed at boys, and seems designed to encourage them into science careers. Girls, unfortunately, don’t fare so well:

The boys advanced toward the huge circular reception desk where a pretty girl with red hair waited to greet them.

“May I help you?” she asked. She flashed a dazzling smile.

“You’re a lucky girl,” said Roger. “It just so happens you can help me. We’ll have dinner together—just the two of us—and then we’ll go to the stereos. After which we’ll—”

“Just give us a nice room, Miss,” said Tom, cutting in. “And please excuse Manning. He’s so smart, he gets a little dizzy now and then. Have to take him over to a corner and revive him.” He glanced at Astro, who picked Roger up in his arms and walked away with him as though he were a baby.

“We came here to have fun, didn’t we?” demanded Roger.

“That doesn’t mean getting thrown out of the hotel because you’ve got to make passes at every beautiful girl.”

“What’s the matter with beautiful girls?” growled Roger. “They’re official equipment, like a radar scanner. You can’t get along without them!”

There is a role model for potential young female readers though. Meet Dr. Joan Dale:

Exactly one hour and ten minutes later, promptly at seven o’clock, the three members of Unit 42-D stood at attention in front of Dr. Joan Dale, along with the rest of the green-clad cadets.

When the catcalls and wolf whistles had died away, Dr. Dale, pretty, trim, and dressed in the gold and black uniform of the Solar Guard, held up her hand and motioned for the cadets to sit down.

Don’t worry about the quality of her scientific research though – it’s been checked over by a whole conference of men!

Joan Dale held the distinction of being the first woman ever admitted into the Solar Guard, in a capacity other than administrative work. Her experiments in atomic fissionables was the subject of a recent scientific symposium held on Mars. Over fifty of the leading scientists of the Solar Alliance had gathered to study her latest theory on hyperdrive, and had unanimously declared her ideas valid. She had been offered the chair as Master of Physics at the Academy as a result, giving her access to the finest laboratory in the tri-planet society.

The best thing about the story is the effort it makes to include accurate science, amongst the far-fetched ideas. For example, a stranded rocket ship needs to ditch its engine but

“It seems to me,” drawled Roger lazily, “that the two great heroes in their mad rush for the Solar Medal have forgotten an unwritten law of space. There’s no gravity out here—no natural force to pull or push the tube. The only way it could be moved is by the power of thrust, either forward or backward!”

“Simple, Roger,” said Tom, “Newton’s Laws of motion. Everything in motion tends to keep going at the same speed unless influenced by an outside force. So if we blasted our nose rockets and started going backward, everything on the ship would go backward too, then if we reversed—”

On researching Tom for this post I discovered that he was also a radio, comic book and T.V. star. Here he is pursuing the deadly Grapes of Ganymede:

I can’t help loving this sort of book. The enthusiasm for this wonderful future we’re going to have is infectious, whilst the characters are unintentionally hilarious. After all, it’s instructive to find out what it would have been like to live in space in the 1950s?

All the Tom Corbett books are available for free via Project Gutenberg. If you like him, you might also be interested in wonder-teen inventor Tom Swift. There’s also a Martian adventure series by Patrick Moore.

Don’t forget, Tom’s waiting for you to “Join him for another exciting adventure in the world beyond tomorrow!”