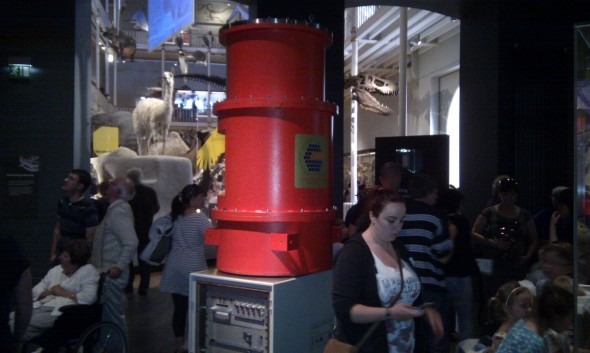 A couple of weeks ago I paid a visit to the newly renovated National Museum of Scotland in Edinburgh. Whilst the new galleries are fantastic (and it’s always great to see dinosaur skeletons) my main focus was on finding the new home of a red cylinder with more than a passing resemblance to a British post box.

This unassuming object is SCUBA – the Sub-mm Common User Bolometer Array – a ground-breaking astronomical instrument which was mounted on the back (or, more accurately, the side) of the James Clerk Maxwell Telescope in Hawaii from 1997 until 2005. It’s job was to trace star formation throughout the Universe by detecting the cold dust surrounding stars, and within galaxies, that’s invisible to optical telescopes. This dust absorbs starlight, heats up (slightly) and re-radiates this stolen energy at longer wavelengths such as the submillimetre (the far-infrared Herschel Space Observatory is also great for this).

SCUBA combined sensitivity with a relatively large field of view, compared to the instruments that proceeded it. This meant that it opened up this hitherto little explored wavelength range, and found unexpected things. One of its most important discoveries were the SCUBA galaxies – extremely dusty, extremely distant, objects undergoing massive amounts of star formation. The image below shows the famous Hubble Deep Field in both optical and submillimetre light. Most of the galaxies seen by Hubble are missing in the SCUBA image, but the ones that are visible are producing around a third of the total optical light present.

The Hubble Deep Field as seen in optical light by Hubble (left), and submm light by SCUBA (right). Image borrowed from http://herschel.cf.ac.uk/science/infrared/astronomy

After its retirement SCUBA returned home to the Astronomy Technology Centre at the Royal Observatory in Edinburgh, where it was built, before moving to its final resting place in the museum. Its successor, the imaginatively titled SCUBA-2, is just entering routine operations in Hawaii. It’s a shame that everyone in the photo above seems determined to ignore it – if you live nearby maybe you could visit it and give it some of the attention it richly deserves.