How do we know…? Where we are in the Galaxy 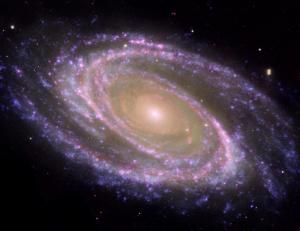 If we could take a picture of the Milky Way like this knowing where we are in the Galaxy would be easy.

Well it’s easy isn’t it, we just go outside the Galaxy, take a picture looking back and see where the Sun sits and what the Galaxy looks like. If only it were that simple. The problem with figuring out our place in the Galaxy is that we are sitting inside it. This means we have to work harder to determine the fine details of the structure of the Galaxy.

The faint fuzzy band that snakes its way across the sky has been identified since ancient times. Both its modern colloquial and scientific name derive from Greek mythology. The “Galaxias” was the milk spilled by Zeus’ sister Hera while feeding Heracles (the hero, not the football team from Twente). By the 11th century the Persian astronomer Abu Rayhan Biruni had theorised that the winding smudge was itself made of countless unresolved stars. This theory would have to wait 600 years for Galileo’s first telescopic observations to be proved correct.

But what shape did this huge mass of stars take and where did we lie within it? Kant and Wright theorised that the Milky Way was a flat disk of stars which rotated due to gravitational forces. The Herschel siblings tried to map out the galaxy by counting the number of stars in different directions. This lead them to the conclusion that the Sun was fairly near the centre of the Milky Way. But there was a problem with their work, something they hadn’t considered.

The space between the stars is pretty empty, but it is not a total void. There are small amounts of gas and dust which, when added up over the huge distances light has to travel to get to us, can block out a fair amount of star light. This gas and dust congregates near the plane of the Milky Way meaning stars within the disk at great distances from the Earth are almost totally obscured.

Imagine you are in a big city on a clear day, looking about you’ll be able to see a collection of tall buildings in the city centre. In the other direction the buildings get more sparse towards suburbia. Now picture the same scene in fog. Perhaps you’ll be able to pick out the vague outline of a few skyscrapers, perhaps not. You might only be able to see the buildings around you. This is what interstellar gas and dust does to the study of Galactic structure.

A huge breakthrough in determining our location in the Milky Way came in the early 20th century when Harlow Shapley used a class of variable stars known as Cepheid Variables to measure the distance to compact groups of stars known as Globular Clusters. He found that the Globular Clusters formed a cloud centred a long way from the Sun. Instead of being in the centre of the Galaxy we were moved to the quiet suburbs.

In my last post I spent a lot of time explaining what a quasar is. Which is handy as Goto et al. have just detected the host galaxy of the most distant quasar currently known (its a vast 12.8 billion light years away from us which means we’re seeing back to a time when the Universe was 16 times younger than it is today).

Quick recap – remember that a quasar is an AGN orientated such that its light completely outshines the light from the galaxy hosting it. “Well”, you’re probably thinking, “if that’s true, how is it possible to see the host at all then?” The answer’s simple – it can’t be seen, not directly. Its (very faint) light makes up a tiny part of the total received by us though. If the quasar’s (massive) contribution could be completely removed, then the galaxy would appear.

This tricky measurement is exactly what Goto et al. did using a newly upgraded camera on the Subaru telescope in Hawaii. The image below is from their paper (copyright Tomotsugu Goto, University of Hawaii). On the left is the original image of the most-distant-quasar CFHQSJ2329-0301 (yes, that really is its name); the blob in the middle is their model of the quasar light coming from the central black hole region. The final image on the right is what’s left after subtracting the model – i.e. the host galaxy. Incidentally, 4 arcseconds (“) are equivalent to 22 kpc or 72,000 light years at the distance of this object.

The detected host turns out to be as large as our own Milky Way which is interesting as it means that it, and its associated supermassive, quasar creating, black hole must have formed rapidly to be the size they are at this early epoch of the Universe. Studying this system, and others like it, will help to understand the complicated mechanisms of galaxy formation.

It was Omega Centauri in the galactic disk with the gravitationally induced star formation. That’s the conclusion of a new paper by some Brazilian astronomers. 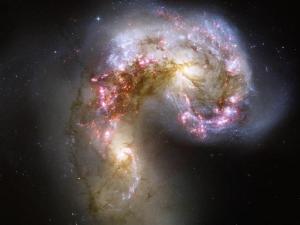 So space sleuths, let me set the scene for this game of cosmic Cluedo. On the right is an image (credit: NASA, ESA, and the Hubble Heritage Team) of the famous Antennae Galaxies where the collision of two galaxies has triggered many massive bursts of star formation. Individual slightly smaller bursts like this have also been seen in isolated galaxies. In star systems such as NGC 6946 clumps or bubbles of star formation have been found. There are several competing models for the cause of these, a globular cluster passing through the disk of the galaxy, an exploding young star or hypernova or a high velocity cloud of gas hitting the disk.

In our Galaxy (the Milky Way), there are two large young clusters that formed 5-20 million years ago Stephenson 2 and BDSB 122 close to each other. So did these form as the result of some incident? The suspects in our star-forming whodunnit are, 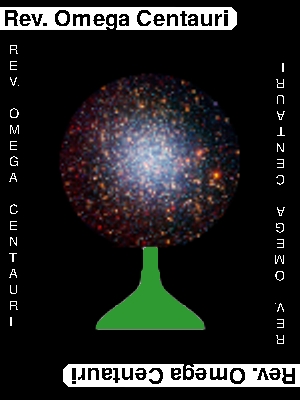 The Reverend Omega Centauri – a globular cluster. An old massive sort of fellow most likely to be found orbiting around the centre of our Galaxy outside the plane of the Galactic disk. When his orbit sometimes takes him through the disk, any gas clouds in the region could get a gravitational kick, leading to the formation of stars.

Professor High Velocity Cloud – a mysterious wandering loaner. A cloud of gas flying through space faster than you would expect for its surroundings. Where did he come from in or outside our Galaxy? Nobody knows. If he were to collide with another cloud of gas then it could lead to a massive burst of star formation.

Colonel Hypernova – hot-blooded, explosive character likely to blow at any time. A high mass star that goes bang sending a shockwave into the surround interstellar gas. This could cause a burst of star formation.

Let’s focus on the first of these suspects. Globular clusters are some of the oldest objects known in our Galaxy, typically older than 12 billion years and containing hundreds of thousands of stars. While most stars in the Galaxy orbit in a disk around the galactic centre, globular clusters are part of an older population of stars known as the galactic halo. These go round the Galaxy in orbits that can take them far above and below the disk. Of course to get from one side of disk to another the globular cluster must pass through the mass of gas and dust in the plane of our Galaxy. The gravitational interaction of a massive globular cluster slamming into the disk can compress gas clouds near the point of impact. They get so compressed that in parts they can collapse to form dense clumps of gas. These clumps then go on to form stars.

So do we have any evidence that this crooked cluster is our criminal? Well a paper that came out recently used a model of the Galaxy to trace back the orbits of Omega Centauri and the two young clusters. Within the errors of their models Omega Centauri could have been in the place where Stephenson 2 and BDSB 122 were when it crossed the galactic disk 24 million years ago.

So the suspect was present at the scene of the crime, but was it there at the right time? Estimates put the age of Stephenson 2 at 12-17 million years and that of BDSB 122 at 7-12 million years. This means the stars in the clusters would have to have formed about 15 million years after their progenitor gas clouds, this isn’t an outrageous suggestion.

So it is possible that this dastardly disk impactor was at the scene of the crime when it was committed. However with an improved model perhaps it will be revealed that the good Reverend Omega Centauri missed the site of the young clusters’ birth. So was it Omega Centauri in the galactic disk with the gravitationally induced star formation? Possibly, but we’ll need more accurate models before we can finally reveal the cards.