Eclipse Week 2: The importance of luck

Have you ever considered why the Moon and the Sun appear to be about the same size in the sky? I think it’s one of those things you just accept and never get round to examining how remarkably lucky that is, and what it would mean for eclipses if it wasn’t the case.

It turns out that the Sun is around 400 times bigger than the Moon but also just happens to be around 400 times further away from the Earth – it is this coincidence which causes the two objects to seem to have similar disk sizes. This means that during an eclipse the Moon is able to completely obscure the Sun, giving us a spectacular show in the process.

We do have some experience of what eclipses would be like if the Moon were further away. In an annular eclipse (see Stuart’s post yesterday for an explanation) the small ring of Sun still visible is enough to drown out the beautiful, faint, solar corona. A more extreme example comes from NASA’s STEREO-B solar satellite which is about 4 times further from the Moon than we are. It therefore sees eclipses like this: 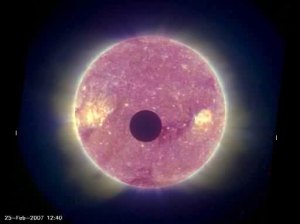 As far as we know there’s no physical reason for the Sun/Moon size coincidence. In fact, since the Moon is actually moving away from us by several centimetres per year, in several million years our eclipses will be a lot more boring! Equally the dinosaurs (if any of them wanted to look) would have seen a Moon which appeared larger than the Sun. Basically we’re just lucky to be around at the optimum photograph time.

Interestingly, the reason we know the Moon is moving away is because of the Apollo missions which are being talked about so much at the moment because of the 40th anniversary of the lunar landings. One of the things the astronauts left behind them were reflector arrays (the one left by Apollo 11 is pictured to the right).

Optical telescopes have been sending pulses of laser light at these arrays ever since – timing how long it takes the light to return gives the distance to the Moon at that moment. The initially narrow laser beam is several kilometres wide by the time it reaches its destination but, given that the Moon is over 3000 kilometres in diameter, hitting the correct area is a challenging task!

Well I think that’s all I’ve got to say about eclipses, but don’t worry as there’s lots more to come from everyone else! Tune in tomorrow when Stuart’s back again to talk about what an eclipse would look like from the Moon’s perspective.