On Saturday 2nd July I, and several thousand over people headed to Jodrell Bank for a unique event: Jodrell Bank Live. Their tagline “where music meets science” meant we’d be treated to sets from, among others, OK Go, British Sea Power and the amazing Flaming Lips, interspersed with sciency bits featuring their fancy new visitor centre and the giant Lovell Telescope (the dish that I’d happily take home with me if I could). I’ve been meaning to write about this since I got back, but I couldn’t figure out how to convey what happened. Luckily for me though they’ve made a highlights movie:

The part at the end where the crowd chant “science, science, science” came after Dr Tim O’Brien taught everyone about pulsars. It was strangely moving!

Here’s a few of my photos from the event. For more there’s the official site along with many other better photographers than me!

The stage dwarfed by the telescope

The Flaming Lips spread colour into the crowd 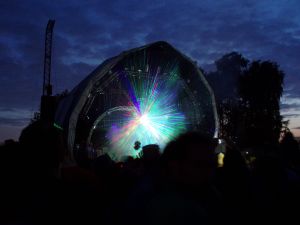 threw in some lasers 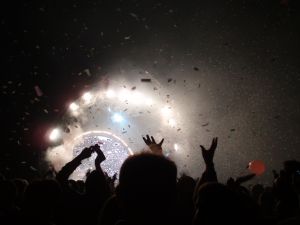 and ended in a confetti explosion!