Postcards from the roof

By a strange quirk of fate, two of this blog’s authors are observing different mountains. Niall is currently observing on Mauna Kea on the Big Island of Hawai`i, while Stuart is at Kitt Peak in Arizona. In between preparing, integrating and using large amounts of lipsalve they have written a bit about their experiences and have taken some pretty pictures (not data). Which one do you prefer, Stuart is a better photographer, but Niall is at a better site. It’s talent vs. beauty in a blog-off.

Stuart would also like to point out that due to a staggering oversight, he has left his DSLR at home and so has had to rely on his trusty iphone and the kindness of strangers to lend him their photos.

Left to right: Subaru, the two Kecks and the mountain of Haleakela in the distance

Niall: I’m on Mauna Kea doing a bunch of observations on the UK Infrared Telescope. Conditions are currently horrible so I’m not actually taking useful data. I’ve never observed this high up before, the low air pressure was neatly demonstrated when I dropped a can of Coke as I got out of the car and it exploded showering both me and the UKIRT car.

Tourists watch the sunset by Gemini and CFHT

As I’ve not take much data as the weather is so bad, but I did manage to wander out and take a few photos of the sunset from the mountain. It’s a popular site with tourists (left) as well as astronomers and as you can see from some of the photos. They seem to gather on the ridge between UKIRT and Gemini with its odd wall-less dome. While the sunsetting behind the Subaru (named, like the car company, after the Japanese word for the Pleiades) dome looks pretty, much of the prettiness is caused by high clouds which make observing very difficult. 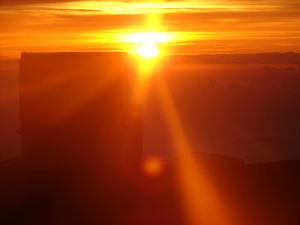 The Subaru dome at sunset

Stuart: I can haz spectra! is what I would say if I was a cute little lol cat but as I am a gruff hirsute scotsman I wont. I am over on Kitt peak in Tucson Arizona on my first ever observing trip! “First observing trip?” I hear you say, “but I thought you where an astronomer?” well you can check out my confessions over at the zooniverse blog. We are here taking specta, measurements of the intensity of different colours that some special galaxies are giving out. We are trying to find more examples of objects like Hanny’s voorwerp using the 2.1 meter telescope here. As I said above I left my DSL at home so I am borrowing some photos from Bill Keel and Drew Chojnowski. One of the coolest things about our scope is just how many others are around it. Kitt Peak has a staggering number of telescopes, most of which can be seen in this panorama:

Our telescope is the one smack bang in the middle of the picture. Drew managed to get a couple of really cool panoramas inside the dome as well. See if you can spot what is strange about the second one. :

The hill here seems to be infested with ladybugs who cower from the sun around the bases of most of the telescopes. I had always thought of them as quite cute but this many makes my skin crawl! 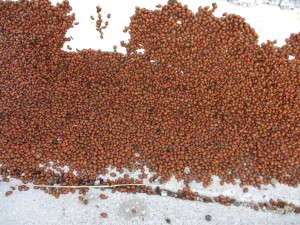 So to get that horrible image out of your head here is a stunning sunset panorama taken from the catwalk of our scope (my new favorite place in the Universe) :

So just to round things up I wanted to share a quick video tour of our control room, until next time enjoy:

5 Comments on “Postcards from the roof”